Didn’t want to derail the A question for Nanaki thread, so I’m testing out replying as a linked thread here. Maybe if there are other comics later, or if people want to talk about making comics in general, it can also go in here. 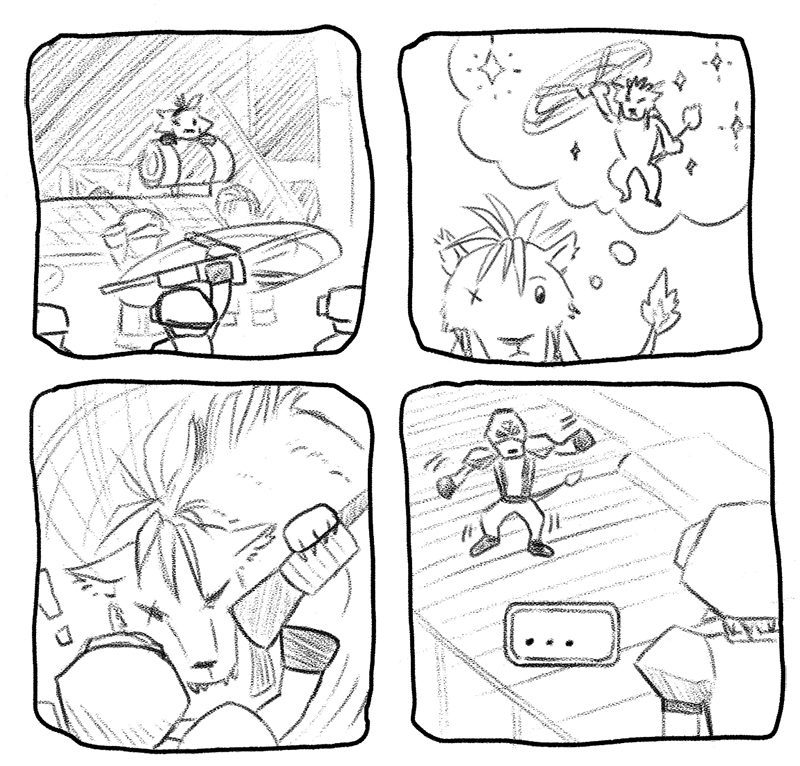 Yeah I love the angles you chose. It tells the silent story so well! His pose in that first panel! <3 Well, and the second. And all of them. xD but I keep coming back to the first.

Thanks! The scene in the first panel inspired the comic. Nanaki looked like he was having so much fun watching the soldiers! Deciding where to crop it was interesting, since the soldiers and Nanaki were pretty far apart on the screen. I did have to move things around to fit them all in the panel. I’m happy Rufus made it in.

I was wondering if it could be read in the wrong order, but then it works both ways and the reader gets a different comedy story with each, which I like.

Ha! I realized after finishing that it was a square 4-panel comic and FF7 is a Japanese game, so there’s zero indication of which way it should be read. It was late so I posted it anyway. :P But yeah, it can sort of be read both ways, huh? Though if it were fully right to left, he should be wearing the uniform in the last panel.

I think even before the actual rendering, it’s a challenge to work out how to stage something like that 3rd panel “Show him attacking a guy and keep it light and keep it clear who’s who”

This was the hardest panel to draw. I had to put the soldier and Nanaki on two different layers and shift them around to see where they fit best. I think you’re right about the focus on the eyes and nose. His face area is also made of similar triangles, which I think helps make it look more cohesive. If you enlarge the V shape made by his eyes and nose, it’s nearly the same shape as his whole head and ears. I tried a version with his mouth open like it’s about to bite the guy, and that looked too scary. Shading the guy darker would’ve also differentiated the two characters.

If I redid this, I’d also make the exclamation mark extend outside the panel boundary, and make the lines around the panels a little thinner and less wiggly. The dark and extremely wiggly lines were left over from my previous idea of making it look as if Nanaki had drawn the comic himself. I think they stand out a little too much here and make the scenes feel too squeezed into them.

Oh lol, re: order, I meant columns first vs rows first. I think the relative size of the gutters imply columns first, because there’s less distance reading as columns, though I did read it rows first so maybe there are other things affecting it! And it works both ways anyway.

I like the thick wiggly lines, myself! I think it does convey the idea that it’s his fantasy.

Though if read right to left, you do get 2 more stories, rather stranger ones.

I meant columns first vs rows first. I think the relative size of the gutters imply columns first, because there’s less distance reading as columns

Oh, you’re right about the gutter size! Yeah, if I’d taken more than 30 seconds to check it, that should’ve been fixed as well. XD

Yeah I felt like a bit of a dick for mentioning it tbh but then it’s such a quick fix I figured it was better to say, and I’d wanna know if I’d done that!

Nah, not a dick. I appreciate the feedback!

Sounds tricky! Well, it paid off.

That’s interesting about the triangles, I hadn’t noticed, but I see it now!

EDIT: My life can be frustrating because for comedy things I tend to think in comics, but I don’t have the artistic skill to make good ones. I’ll know the idea of what should be in each panel and the rhythm, but I’m not the person to actually draw it. So for things that I’d rather present as a comic, I just have to write out the scripts in words only. That’s annoying when I know there’s stuff that can only be done visually! So it’s very satisfying seeing a comedy comic done the way I think they SHOULD be done!

for things that I’d rather present as a comic, I just have to write out the scripts in words only

Interesting! I think that’s part of the reason I like your writing; it feels easy to translate into comics. There are several of your fics that I’d wanted to try it with, but didn’t feel like I had the skill at the time. Thinking in comic format is pretty natural for me, too, though I focus much more on the visuals haven’t made it past the clunky dialogue stage of writing. If you posts scripts on here, I may try to draw them!

(And I’m so flattered! Yeah, aside from comics themselves I think at one point I read an odd amount of books about making comics… and cartoons. Had some books by Matt Groening, and Larson’s Prehistory of the Farside, and hahaha this thing https://www.amazon.com/How-Draw-Manga-39-Graphic-Sha/dp/4766113306 (I don’t think I remember anything much from it except the bit about panel layouts. Also it was NOT that price at the time). So I probably take a comicy approach to stories much of the time; I know I try to get original characters to pass the silhouette test…)

And I’d love to read them!

at one point I read an odd amount of books about making comics… and cartoons. Had some books by Matt Groening, and Larson’s Prehistory of the Farside, and hahaha this thing https://www.amazon.com/How-Draw-Manga-39-Graphic-Sha/dp/4766113306

I’ll have to check those out! This is the only comics-making books I’ve read so far: scottmccloud.com - Understanding Comics. Back when I read comics all the time, it never crossed my mind that people would write whole books about how to make them. It’s been a lot of fun exploring what’s out there recently!

Ooh, haven’t read that, looks like it may be a classic text!