I can never remember his damn name. How I found it this time:

So yeah, this guy: 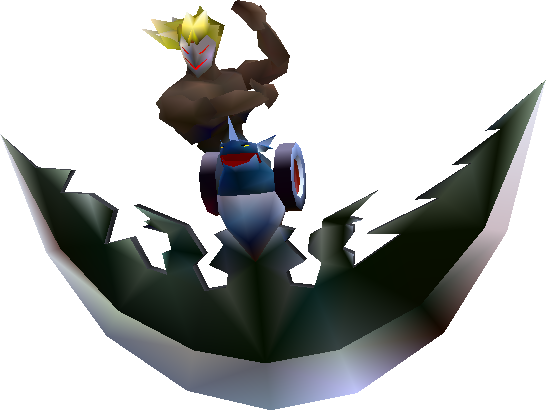 Is that a frog under him?

It didn’t fit tonally so I had to leave it out, but I wanted a scene in Maladaptive Daydream where Vincent would just encounter one of these guys on the landing and go ‘what the fuck?’.

I decided in that fic that the monsters in the manor were due to Hojo’s later experiments (along with perhaps some mutations caused by leftover biohazards). But always interested in other explanations, the more convoluted the better!

(And you know what, on the off chance it comes up in a search engine and saves some poor individual hours of futile googling: The name of the FF7 monster that swings on an axe is Ghirofelgo. Ghirofelgo is that guy on an axe in the Shinra manor in Nibelheim. Ghirofelgo.)

I think one of the devs had a nightmare and decided to work through his issues by designing this guy. He’s half surfer-dude, half Hammer House of Horror pendulum-axe.
When you fight him, he rarely inflicts any damage, and if you hit him hard enough he falls off his chain and lies on the floor like a beached whale, pathetically grasping for his swinging chain so he can climb back up again.
He makes me think of the man-pig scene from Lindsay Anderson’s O Lucky Man 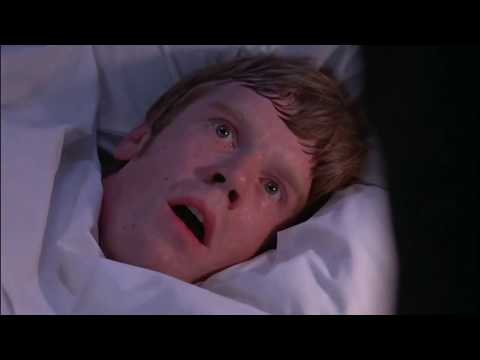 Which absolutely freaked me out when I was kid.
I always imagine him crying out to the party “Help me, help me!” but all they can see is a monster.

Yes I think he is an experiment of Hojo’s, something humorously lighthearted that he made as a break from the Jenova Project. He’s probably a simple backpacker who wandered into the Shinra Mansion thinking it was the local youth hostel.

I think one of the devs had a nightmare and decided to work through his issues by designing this guy.

I think you may be right. I feel for whoever designed his MobiusFF card; it looks like they were given the task of making him into a serious monster, so they took out the frog and… connected his torso muscles directly to steel? It’s a gorgeous painting, technique-wise (textures and angles and lighting omg), but it makes no sense because he makes no sense and was probably a nightmare demon to begin with. 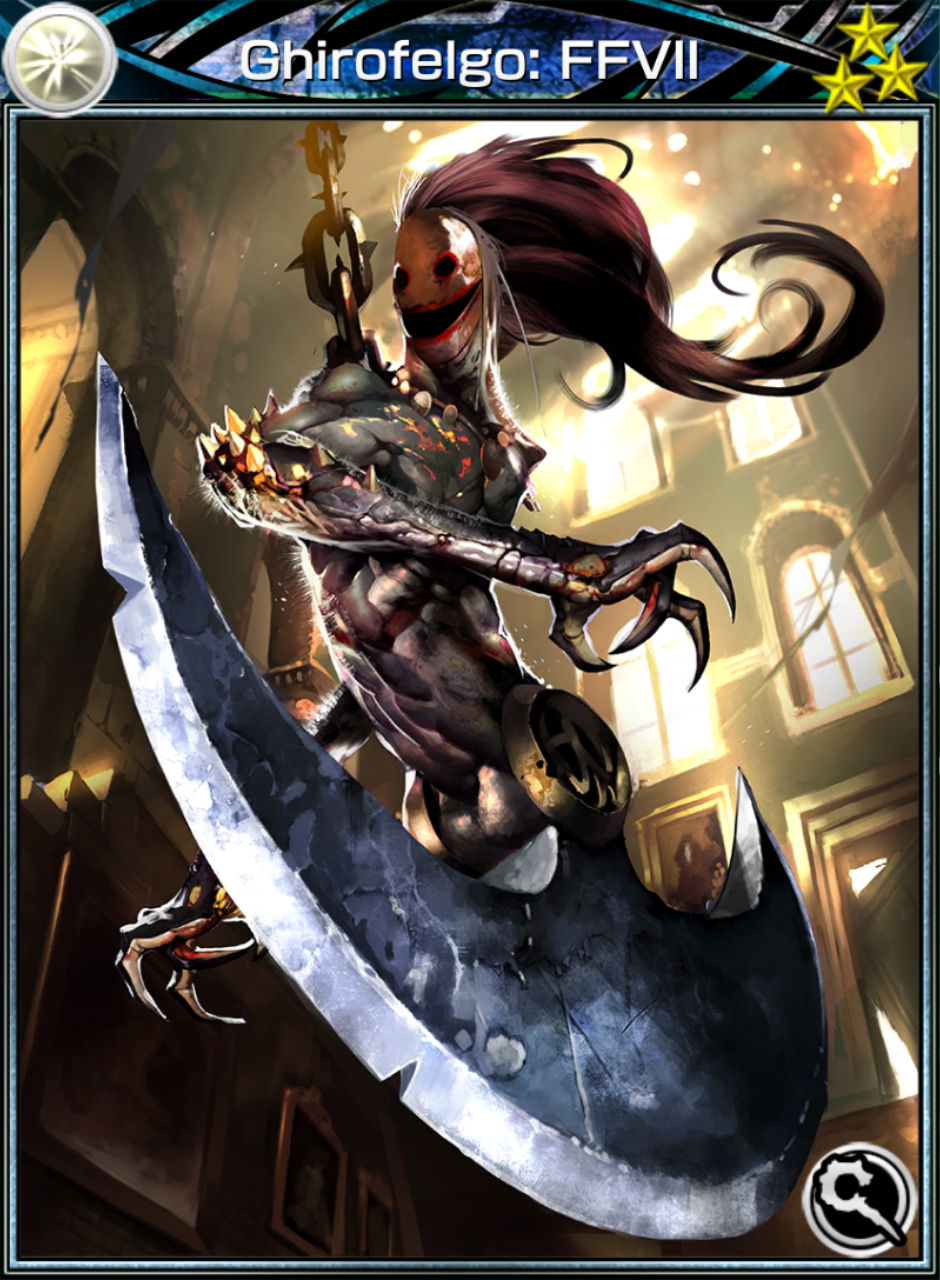 He’s probably a simple backpacker who wandered into the Shinra Mansion thinking it was the local youth hostel.

That poor backpacker. ;_; Imagine going on vacation and suddenly HOJO.

I was going to crack a joke about that being sung to the tune of ‘suddenly seymour’ from little shop of horrors, but then I got the worst bout of deja vu; did we have that conversation before??? or am i a time traveller…

EDIT: Ghirofelgo’s a blond. Maybe he’s one of Prez Shinra’s many illegitimate children, left to Hojo to take care of. :0

did we have that conversation before??? or am i a time traveller…

Hmm… it may be the latter. Although you may have mentioned Little Shop of Horrors at some point.

Ghirofelgo’s a blond. Maybe he’s one of Prez Shinra’s many illegitimate children, left to Hojo to take care of. :0

Yes I think he is an experiment of Hojo’s, something humorously lighthearted that he made as a break from the Jenova Project. He’s probably a simple backpacker who wandered into the Shinra Mansion thinking it was the local youth hostel.

The Fic Prompts thread is empty and these are both great ideas! Any objections if I start linking stuff over there so it’s all in one place?

Go for it! We probably already have overlapping threads; I am so awful at not checking things overlap that I should probably take the advice in the site guidelines and read for a while before posting… :P

So yeah, this guy:

Hello, I wrote a small fanfic based on this idea and forgot to post it. This is from the perspective of Hojo:

Those fools at the Shinra Taxonomical Society of Monster Studies (STSMS) really believe that my beautiful Blond creations at the Shinra mansion are naturally occurring monster phenomena! They have the unbelievable gall to hypothesise that the origination was via the feebly slow, and unreliable procedures of natural evolution. This can plainly be seen in the likes of Hell Houses, Dorky Faces and of course Flower Prongs with their abstract shapes and excessive appendage. Making no sense but from the context of a messy and pointless struggle from minute single celled monsters to the grotesque forms they possess today.

No, my Ghirofelgo were designed meticulously and with great purpose! But I cannot let it be known publicly for the sake of ‘Shinra PR’… Their swinging poise, robust shoulders, and luscious golden locks. This dynamic design took my months of preparation just to even theorize. The horn-ed frog race car midriff came to me in a dream!

I must here record the formulae for the Ghirofelgo creation. Once their design comes to light in the scientific community, nobody can claim the credit but Me and here is the proof!

Follow this process with the utmost precision and the horn-ed race car frog can and should be attached in the obvious fashion.

I have grown depressed with my creations as of late… If only I could recapture the glory days of my creations at the Shinra Mansion! I have devised plans for a cyborg research assistant that could facilitate this aim, but several key features have yet to be realised. I will begin from the basis of a previous design:

The horn-ed frog race car midriff came to me in a dream!

I laughed out loud at this!
This character is like an insane child putting Lego together in wierd new combinations, only his Lego is human body parts!!!
Great fic.

Do not implement horn-ed race car frog (no need).

There is something slightly heartbreaking about Hojo lowering his ambitions to the point where he even entertains the question of whether there is a “need”.

I already said, but the inexplicably yet consistently hyphenated ‘horn-ed’ cracks me up. I also like the perspective in the first paragraph; you do get a sense of the scale, and I like the conceit of a scientist that disdains evolution.

This character is like an insane child putting Lego together in wierd new combinations, only his Lego is human body parts!!!

First, you must find a backpacker, (these occur naturally).

I nearly died laughing. This whole fic is great. You are great. I love it!