We should remix the Cosmo Canyon theme. :P Though I have no real percussion or percussion-knowledge and it feels like it deserves decent percussion. Maybe it doesn’t matter if I just hit a door or something. Well anyway this may make a fun collab.

(Maybe would make sense to just copy the original to start? Most seems possible with a recorder and a tamborine though not sure what to use for those synths.)

(I finally got round to checking some details today and it’s in E minor. I’ll prolly transcribe a simple sheet; I had the notes for the melody memorised… but in D :p I guess I was going from memory at the time and it just stuck. Em seems like quite a nice key, though; relatively easy to play on a few things.)

Ok worked out some chords,

Put together some rough sheets (from memory so may not match up perfectly; I think I mess with the rhythm every time I picture it (maybe has different rhythms for canyon vs red xiii’s theme vs a great warrior? EDIT: yeah, that’s what I did; my brain squashes them together at random). Included the more rhythmic part mostly so the timing was more obvious because it looked weird with the empty bars on either side. Instrument names chosen at random.

Haven’t played along to check the chord changes are in the right place. 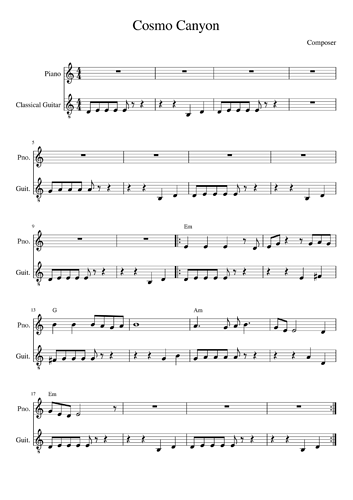 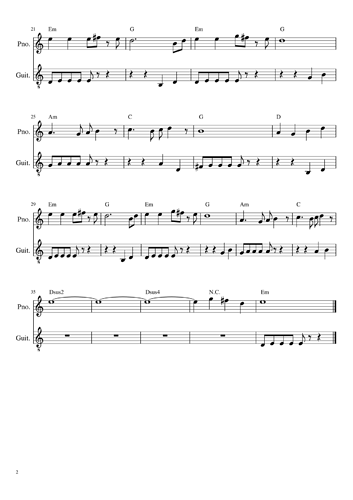 May try to clean them up some time. (the software doesn’t let me put accurate slides in, though

I’m tempted to say the actual ending works better on a wind instrument, but this ending (Great Warrior version) works better on something with strings. Maybe depends if there’s vibrato. Or maybe am just wrong.

I don’t think the feeling of exertion with the rhythm translates when it’s not on wind, so changing notes lets you recapture that feeling a bit, so you get the same sense of sadness overall.

(I recorded the guitar chord-changes and can share if useful to anyone. It’s slower than the original and I didn’t count in, or use a metronome or tune the guitar first (

) so although I’ve been having fun noodling over it, it’s not much good for recording anything.)

EDIT:
I was trying to work out what about the theme made it sound so traditional. I thought it was maybe a pentatonic scale, and yeah, that’s it. Or at least, for the first part (you can see quickly, if you start on D#, you can play the melody on just the black keys. Or EGABD in the actual thing). It then switches/broadens out to using a minor scale for the chorusy bit.

Rough single-panel comic idea based on dreamwidth discussion with @MideelTourismBureau earlier, noting before I forget-- Gast, Hojo, Lu in foreground, squeeing over some

, while jenova floats behind them in full eldritch horror mode. Haven’t thought of a speechbubble.