The canyon is pretty great. Chill vibes, a bonfire, an observatory, and I <3 the background music. I do wonder whether I’d end up choosing to live in Midgar if I actually lived in that world, though.

Am getting this Cosmo Canyon remix stuck in my head every time I visit the site! OC ReMix #1306: Final Fantasy VII 'Ascension to Cosmo Canyon' [Cosmo Canyon] by Reuben Kee - YouTube

I have always loved Junon because it’s metallic and grimy and industrial, but it’s also by the sea. I imagine one can hear the seagulls constantly. Probably gets some really cracking storms. And it’s always a November tea-time in Junon: the sun is always just setting and the clouds are purple.

Oh, interesting, I dislike the industrial style myself but I have nice associations with Junon because so much comedy seems to go down there (and I guess I like the contrast between that and the military aesthetic). I hadn’t thought about storms before but I bet you’re right. I can imagine kids on Gaia getting excited when they hear they’re going to the beach, picturing something like Costa Del Sol, and then being disappointed when they get some misty grey rockstrewn thing up by Junon. Seems like that sort of coastline.

My username gives it away, but I do like Mideel. It’s a weird dead town that was probably a popular tourist spot at some point. The residents are the kind of people who would paint a fake door in the weapons shop to have fun with visitors (and the weapons shop has a cannon?). Then there’s how Lifestream is close to the surface there, so all the tourist stories and superstitions that are silly on the surface probably have their roots in historical Lifestream-related things. I like to imagine their “tourism bureau” is one old lady in a shack, selling overpriced hotsprings-themed trinkets.

Yes - I wonder why it’s so dead? It’s the kind of place I’d love to go on holiday. In my head I imagine it being in some ways like a Japanese hot springs resort, but in the middle of a Malayan jungle, and also a spa town where people go to heal from chronic illnesses - hence the clinic. I wonder if people ever used to believe that a brief immersion in lifestream was good for what ailed you?

Maybe Wutai, Costa del Sol and Icicle Inn have stolen all their business?

I love it! Way, way back, I invented an OC girlfriend for Rufus Shinra, and she was from Mideel. I made the place every Australian stereotype. :P I think he got stuck there after an attempt to assassinate someone in AVALANCHE ended in the wrong sort of explosions; he then had to live incognito for a while and everyone either thought he was dead or wanted him dead, so he had to try to live that beach-and-bbq lifestyle for a time. He was split between “TSENG PLEASE RESCUE ME FROM THIS HELL” and “maybe this isn’t so bad”. xD I tend to think of it as somewhere that’s out-of-the-way for nearly every other character, and where the locals are very very chill verging on terrifyingly irresponsible.

Maybe Wutai, Costa del Sol and Icicle Inn have stolen all their business?

That makes sense. Those places all seem newer and like they have better accommodations. I also sometimes think Mideel’s earned a bad reputation after one too many people fell into the wrong spring.

I invented an OC girlfriend for Rufus Shinra, and she was from Mideel. I made the place every Australian stereotype.

Ha! I would read that. It’s always fun to see Rufus thrown into annoying but not very life-threatening situations. Though if this was Terry Pratchett style Australian stereotypes, his life probably was in danger.

I also sometimes think Mideel’s earned a bad reputation after one too many people fell into the wrong spring.

Something I missed or misinterpreted on my early playthroughs was that it just overexposure to mako, not necessarily Jenova, that could turn people into monsters. So if exposure to too much lifestream can have similar consequences… Well, ‘The only holiday town where you’ll leave with more limbs than you had when you entered!’… I can see that being hard to sell.

Maybe that’s why their weapon shop is so well-stocked.

It seems more like the type of place that would use them for self defense, but I suppose it could also be spun into a horror story about the town luring tourists there to hunt the monsters they turned into.

That would be fun! It sounds like a good horror premise. I worked at a job that seemed to be a cover for something like that, once.

Either way, people outside of Mideel will strongly encourage you not to bring pets. Otherwise, well, you start with a seamonkey, and before you know it… 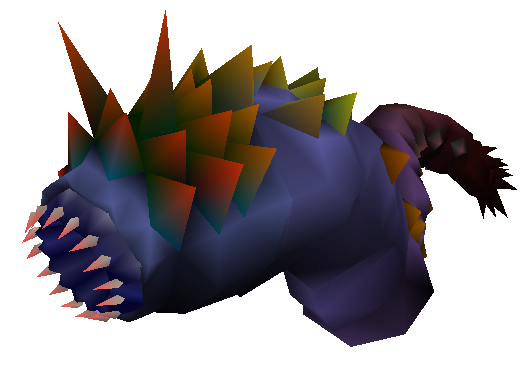 EDIT: Actually I think it looks a bit like Cloud with a dye job.

I worked at a job that seemed to be a cover for something like that, once.

I am SO curious! But privacy and all, so I’ll have fun making up a wild story about it. Or maybe I’ll try to write this fic or draw the scene. Hmm…

Are you sure that thing isn’t Cloud? It’s even wearing his turtleneck.

Did you work at the Chernobyl exclusion zone?!!

I’ve always like those sand worm monsters. Clearly inspired by “Dune”. I love that the devs of the OG were all huge sci-fi nerds and put all their favourite sci-fi elements into their games. What I learned from FFVII is that it’s okay to borrow ideas !!

I’m writing a lot about Wutai right now, and ever since I learned that Wutai is an actual place in China - a sacred Buddhist mountain - my world-building has been 10,000 x easier because I just go to Google maps and borrow the names of towns, villages and rivers from the area. I translate them into English on the grounds that if you speak Wuteng, then the placenames would have actual meaning for you and not just be sounds.

Also, isn’t it interesting how the fandom has decided the people of Wutai speak their own language, when I don’t think there is a shred of evidence for that in the game?

Are you sure that thing isn’t Cloud? It’s even wearing his turtleneck.

Did you work at the Chernobyl exclusion zone?!!

:D Not unless they misled me even more badly than I thought, and tbf I’d put nothing past them-- but I strongly suspect the office was at least on a hellmouth.

I love that the devs of the OG were all huge sci-fi nerds and put all their favourite sci-fi elements into their games. What I learned from FFVII is that it’s okay to borrow ideas !!

Hah, yes, I don’t watch much so my life is a continuous journey of noticing details FF7 pinched. It does make me feel a lot better about starting every ‘original’ project as a fanfic.

Also, isn’t it interesting how the fandom has decided the people of Wutai speak their own language, when I don’t think there is a shred of evidence for that in the game?

I think partly why I go with this sometimes is that we see evidence of two written languages in the game, since things are written in both English and in kanji. And you see the kanji in rocket town, which is in close proximity to Wutai, and in the Midgar slums, where I’d imagine there’s a big population that would’ve fled the war and relocated to the city. At the same time, the party talk to everyone worldwide with no trouble, so it looks like either Gaia doesn’t have as much linguistic diversity as our world, or everyone learns a common tongue. That’s one of the little details that gives me trouble if I start a project as a fanfic and then try to turn it into an original thing! There’s a lot that people will just go with in fic that needs more explaining otherwise. ;_;