How did Aeris get through the sleeping forest?

I suppose the person in bone village does imply it’s sometimes awake. What does that look like?

She gets herself a Lunar Harp in Bone Village

Excavator 3
You can awaken the Sleeping Forest if you have the Lunar Harp.
Once awake, they say the forest will open a road for you.
The girl in pink that just went in also used a Lunar Harp to get through.

Since Cloud also has a Lunar Harp, I guess the awake forest looks like what we saw.
I like the idea that the trees demand a toll in song before they will let you through.

Oh hah I missed/forgot that line, so at some point my brain switched it round and had them giving the forest a lullaby so they could pass through…

I get why for tonal reasons they wouldn’t explore the comedy potential of having the team trying to play a harp onscreen at that point, not to mention that’s not really the style with key items in that game-- but am having fun imagining Aeris wheeling around a fullsize pedal harp that she doesn’t even know how to play. I guess the Bone Villagers would have tuned the harp, and then there’s that image of it from the odd version of the game with images (I think the PC version? Am very lazy and not looking right now). So my sillier image doesn’t work if it does look like this: 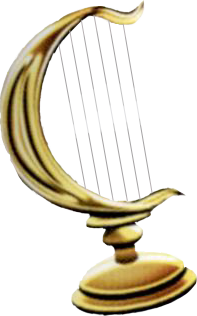 That suggests it’s more like a lap harp (and an uncomfortable one from the look of it!). I think it’d be hard to make it sound bad, anyway. But I like the idea of them all just making a racket. They got the forest’s attention because it was like, “wtf was that???”.

Hm. Does the forest have dreams when it’s asleep? Being thrown into the dreams of a forest sounds like an effective way to confuse humans. Maybe the Cetra used to have a different way to communicate with it, and used the harp as basically a doorbell for visitors.

Gast squeezes Ifalna’s shoulder. “What do we do with the harp?”
“The forest will awaken when it hears its song, and let us pass through. In theory. I… I don’t know how to play the harp.”
“The thing about a harp,” Gast smiles, “is that it tends to sound quite nice no matter what. This forest has made a safe choice, I think.”

Maybe one day it’ll be more in the mood for metal.

Separately, my mind’s playing around with some weird foresty dreamy stuff at the moment in the hopes of turning it into a fic (that’s why I was wondering about the topic in the first place!) though it’s currently one that’s fun in my head and then dries up the instant I try to put anything on the page. Maybe I just like the feel.