Thread for all things Palmer!

I was just watching a video of the boss battle since we were talking about it earlier: 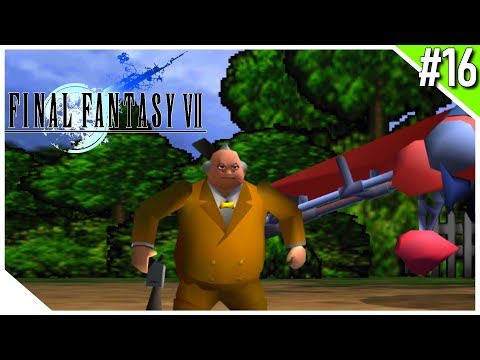 Curious about stories behind why he’s dancing. Exercise? Enjoyment? Intimidation?

I don’t think he’s dancing. I think he’s doing that skipping from side to side thing that kids do when they taunt people. I can just him chanting, “Nanee-nanee-boo-boo, stick your head in poo-poo.” He has a mental age of 6. I don’t think there’s a single boss in the entire the game who enjoys their boss battle as much as Palmer does - and he’d have got away with it, too, if it hadn’t been for that meddling truck!

I guess I think of that as dancing!

Also I like the quiet comedy in that clip of him having nothing to steal.

I always alternate between headcanoning Palmer as a sharp astrophysicist who just doesn’t give a shit, and as a guy who was promoted due to pure nepotism and isn’t quite sure what numbers are. OG doesn’t give us much to go on beyond ‘likes tea’ and ‘is coward’. He does have a professorly vibe but I’m not sure whether it’s just the bowtie doing that work.

Palmer has blond eyebrows
Is HE President Shinra’s illegitimate son too???

Sure, he looks too old for that. But a steady diet of lardy tea will do that to a person.

I dunno, I think it’s suspicious…

Maybe his name is Palmer Shinra and he’s the Prez’s younger brother?

I think this is more plausible. But I’m still amused at the idea of him exclaiming “I’m 31 years old!” 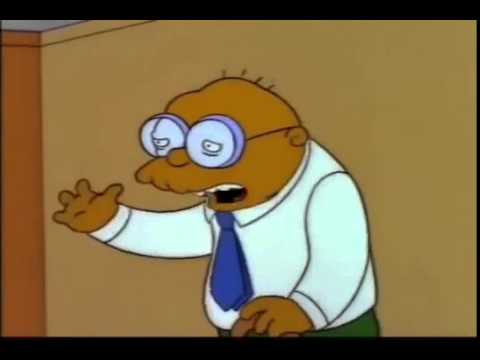 Was Palmer good-looking in his youth?

He’d be average-ish in my mind, but that’s boring. So I downloaded FaceApp and used one of the young filters on a shot of him from Remake. 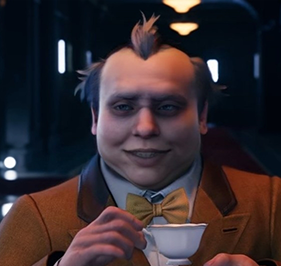 And then slimmed him down a bit in photoshop and added some hair (lighting and rendering style is all wrong but oh well). 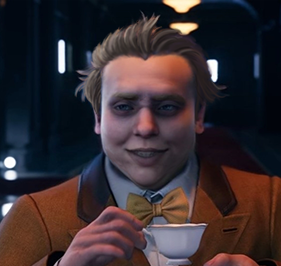 Good-looking? Not? Absolutely cursed? You decide…

He reminds me of Peter Pettigrew!

(edit: though why, I am struggling to work out, because I don’t think there’s any feature where I can say ‘they have that in common!’)

edit #2: I tried giving him a Heidegger makeover, in case he was one of those guys who could completely transform his face with the addition of a beard: 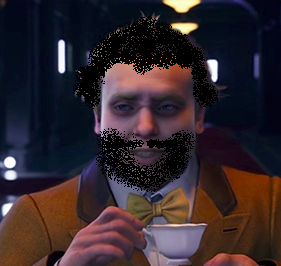 I… don’t think he’s one of those guys.

He reminds me of Peter Pettigrew!

Oh! I kinda thought that too. The shape of their mouths is a bit similar, or at least the way Palmer’s showing his teeth in this shot. They both might also have a longer than average distance from their nose to the top of their lips, and sort of large noses, though pretty different shapes. (You somehow got me to stare at Palmer for another half hour trying to figure it out. x_x)

I tried giving him a Heidegger makeover

But I always do this. “This person looks JUST LIKE that person!” And I can’t find anything that makes them look alike. But I think it every time I see either of them. Maybe it is just the mouths…

I’m still laughing at how much your youthful-Palmer looks like my internal stereotype of a guy studying physics! I can’t work out if this is just me being mean to physics students, given Palmer looks like a literal clown, or if they based him off some real famous physicist I have in the back of my mind, or what. But he does, it’s eerie. Maybe it’s just the bowtie.

It’s 2022 and we’re introducing the Hot Palmer Challenge. Contestants have to make Palmer hot and put him on tiktok or whatever it is people do these days. You win if you get someone to message him with “send nudes”.

It’s 2022 and we’re introducing the Hot Palmer Challenge. Contestants have to make Palmer hot and put him on tiktok or whatever it is people do these days. You win if you get someone to message him with “send nudes”.

how bad is it that i’m seriously considering this

The guy who played Peter Pettigrew is called Timothy Spall and you’re right, there’s a distinct resemblance. Here’s Spall as Palmer, but I had to apply a watercolour filter to make it look half decent. 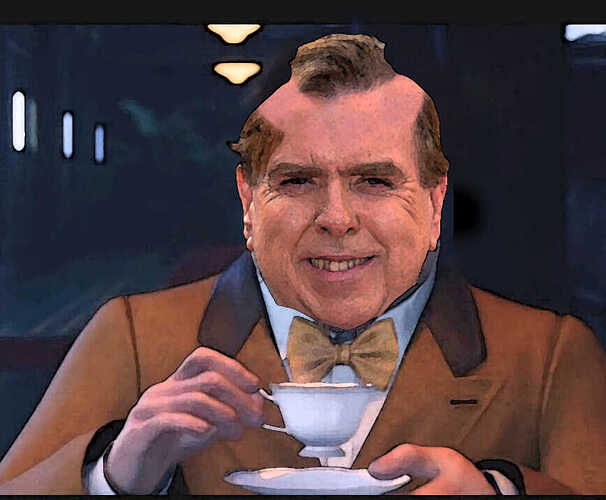 Quick, someone start a rumour that they’re making a live-action FF7 film and ‘leak’ the stills!

“Have you seen this?” said Tseng, unsmiling.

Reno looked at the screen. A video-sharing site.

Below, hundreds and hundreds of videos, of Palmer, fat man Palmer, Head of the Space Department, photoshopped to look, well… hot. Some with abs, some with sculpted facial hair, and on, and on…

“What the fuck?” Reno wiped his forehead.

“Did you do this?” Tseng watched him.

“I’m not a frickin’ psychopath.” Reno stared at the screen. A gif of Palmer rotated in front of them, blew them a kiss, wiggled its hips; Tseng scrolled down rapidly before they could see what happened next.

“This is a disaster,” murmured Tseng. A thousand Palmers winked at them, in varying states of undress.

“That too,” said Tseng. “But that’s not the main issue. You don’t understand. This, this fan-following… Rufus will be jealous.” 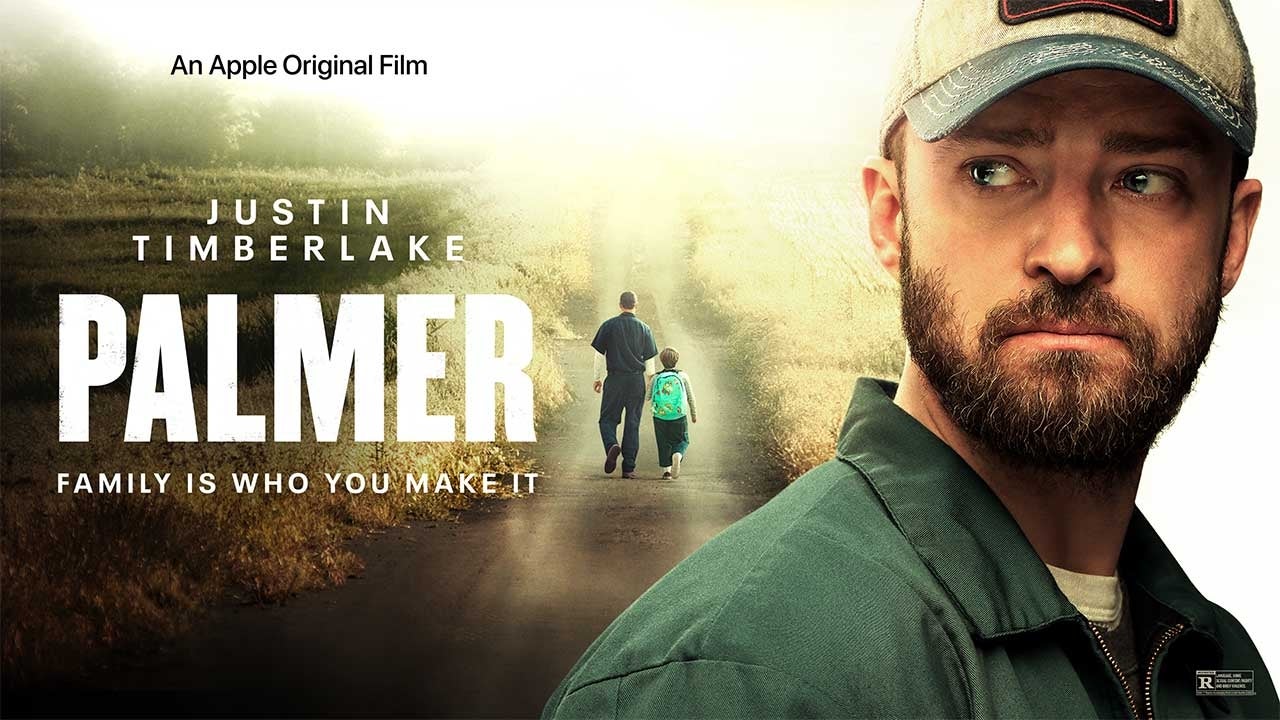 Well, here’s the son of Timothy Spall, Rafe Spall, also an actor. Maybe Palmer looked like this when he was young? 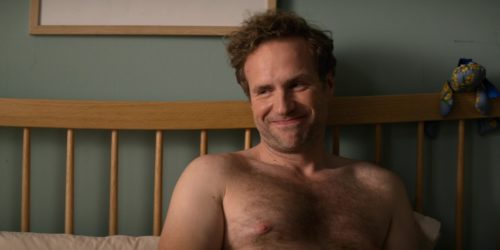