I wonder about this a lot.

Why is it blue and frilly? Why a long skirt with a zigzag thing? Why the hair wrap?

They changed it from OG-- why?

Was the hair wrap to explain why the hair didn’t move much, bc of animation limitations on the PS2?

I try to find symbolism in the costume but I mostly draw a blank. Okay, we get the impractical red heels because they’re a stock symbol for a love interest, I guess. And maybe the costume is blue because it doesn’t match with Vincent’s red, so it shows it’s never gonna happen?

Idk man, it’s such a weird choice of colours and designs. Does anyone know what happened behind the scenes on it? I never find anything when I search the net, but I may just not know what to search.

It’s because she was designed by a man and most men have no idea what women like to wear. It seems obvious to me that Lucrecia would wear comfortable and practical clothes around the lab.
Also kind of wierd that her original outfit still fits her when she’s 9 months pregnant.

Well, I agree (they didn’t even give her a bump!), and this being the game that brought us Shalua Rui and all… but I’m also curious what if any their own reasoning is. Like, did he just see the outfit in a magazine and go “whatever, put her in that”? (I mean given Reeve’s odd dress thing that looks like it came off a catwalk rather than out of the FF7verse, seems possible) We know her DoC earrings are Gackt’s earrings because of course they are, but other than that… It’s such a specific costume! And so weird. Does it really come down to something like “It’s blue becuz she’s sad”? Did they think mothers only ever wear long skirts and frills? Is that where it’s coming from?

It bothers me both from a “this makes no sense for the character” and “this doesn’t work aesthetically” angle. If you want to draw some dramatic Lucrecia & Sephiroth art, or Lucrecia & Vincent art, you don’t have blocks of colour in common. And OG did. I guess I’m like “why isn’t she wearing RED???” Except for the clashing shoes, anyway. But why isn’t at least the hair wrap red?

And that’s before we get to the silly crystal costume, but they obviously had some obsession with angels so to me that one is at least explained. Silly explanation, but I can at least see the aesthetic they were going for.

I know before the game came out, they were playing around with making players think Shalua was Lucrecia, so maybe it was a joke along the lines of “hahaha u thought she was in this stupid costume but Lucrecia’s skirt has fabric in it!” and they have to be understood in contrast to each other. I don’t know…

Shalua’s outfit is an abomination.

This is entirely made up because I never paid much attention to Dirge, but if I’m speculating, I’d say:

I have no clue why the hair wrap’s yellow. It must mean something, if it’s the only part of her other outfit that remains when she’s in the crystal. Is it yellow for the moon? That would go with her name, and how Vincent is kind of a were-creature.

I’m inclined to think they just like asymmetry because they think it lends visual interest, given how many other characters they give asymmetrical stuff (I was being flip about Lucrecia-Shalua, but they really do have a similar silhoutte, clothes-wise, and I think those tops are similarly constructed). It’s possible to read some kind of ‘this character is unbalanced’ into it but her costume looks to me like a dowdier version of Yuna’s songstress costume from FFX-2. The games came out around the same time… Maybe they just really liked that costume… (also lol just looked again, I’d forgotten just HOW similar aspects were)

re: colour, hm, interesting, now that I think about it I’ve seen fanart that draws out the Lucrecia/Hojo colour similarities; it would be nice for this to be intentional so I hope you’re right on this. That would make it much better!

I think that purplish is only the SOLDIER uniform, though? I’d say Shinra’s… mainstream… branding tends to be red (certainly the diamond… Hoping not to discover anything that means my running joke that Rufus was named after the company branding falls apart :P).

I hate the frilly thing so much. Haaaaaaate. The only thing I could think was that maybe it was meant to evoke water and… waterfall cave? But then I don’t think Dirge does anything with the waterfall? I never paid much attention to Dirge myself because I just get mad. xD But god there is no rescuing that top.

Re: zigzags, I’m tempted to say that Nomura wanted to put zips in but was somehow prevented. But yeah, in the concept art the skirt does look ‘bound’ (and uncomfortable lol) so you may be right about that, and it would also explain the hair wrap!

I’m inclined to think any similarity with Jenova’s silhouette is coincidental and they just liked draping things off arms for visual interest (thinking of Yuna here, too) but this is another where it would be nice if it were intentional. However since the overall outfit is so stupid (why is she in a crop top) I just can’t see them having given it that much thought. “Man, I’m so depressed… WHAT IF I TEAR UP MY LABCOAT AND TURN IT INTO A SEXY DRESS!!!” ah, we’ve all been there.

I have no clue why the hair wrap’s yellow. It must mean something, if it’s the only part of her other outfit that remains when she’s in the crystal.

Right? They’ve consistently kept this and it looks stupid and it’s just really really odd, so I’m like ‘WHY’. Is it that they thought she had too much hair for a bobble to possibly work? Is it because it matches Vincent’s glove and sabatons?

So I wrote this out of order and remembered the songstress thing toward the end of typing this comment. But it occurs to me. Iirc in the planning for the OG, Lucrecia was described as being the idol of the lab. Did they give her a modified songstress costume because of this? 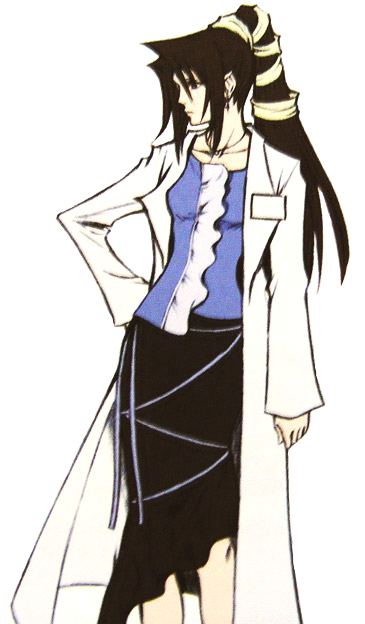 You’re probably right about the asymmetry, and I’d forgotten about Yuna’s X-2 costume. After seeing that, it feels like that explains almost the whole thing. And agreed, that outfit would’ve been better with boots.

Oh, yeah, you’re right about red being Shinra’s brand color to the outside world. I love your Rufus joke! I was thinking that they use a lot of blues internally, like the security troops’ and the Turks’ uniforms. Matching Lucrecia’s outfit to SOLDIER could make sense, too, since the program wouldn’t exist without her. One way to draw matchy-colored Lucrecia and Sephiroth art would be to put him in the usual SOLDIER uniform.

The frilly thing is so bad. The shirt doesn’t even line up on either side of it at the bottom. If it were another character, I’d say there were buttons under the frills and they fastened them wrong, but I don’t think that fits with Lucrecia’s personality. Bah.

If there were some symbolic meaning behind the crop top, I guess it could be emphasizing her past pregnancy. But then there are so many other characters with crop tops that it feels more like some random design thing in context.